Nothing beats the experience of actually being at a sporting event. The fans. The hot dogs. The wave. And of course, the mascots. Players, coaches, and even ownership can change, but your team's mascot is the identity of the franchise.

This is the first installment of "Furry Fandom". Each week, I'll post another mascot that has forced my brain to short circuit. To kick it off, I've chosen three of my favorites.

The story of Monty Biscuit is a sad, confusing, and seemingly savory one. The Montgomery Biscuits, a Tampa Bay Ray's AA affiliate, have two mascots. One is the above Ron Swanson dream of a buttermilk biscuit with butter for a tongue. The other is an overweight and orange anteater-ish "animal" named Big Mo.

Monty is featured on all of the team hats, jerseys, and logos. Big Mo is the physical mascot at the game. What's the connection?

This means that one of their mascots loves to eat the other one. WHAT? How does no one care about this? You are quite literally cannibalizing your own brand.

Well, I care, Monty. I care. Also, you look delicious.

Note: The very funny @realkittenpants made me aware of Monty. Now I'm making you aware of her. Follow her and don't look back. You can never look back. 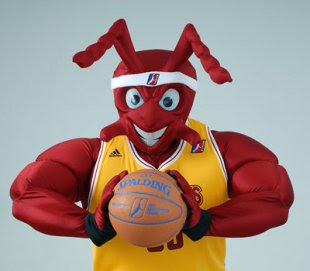 The Mad Ant spends most of his time cheering on the NBA D-League Fort Wayne Mad Ants. According to the picture above, he also works out a lot. Between mascotting for the Mad Ants and lifting weights, I have no idea how he finds time for his 3rd activity: fueling my nightmare quest to vomit hell.

Excerpts from his bio page:
Age: Young At Heart
Favorite Saying: "I didn't do it!"
Book the Mad Ant for your next Event or Birthday Party!


Apparently, this roided out Guillermo Del Toro extra thinks of himself as young spirited, will gladly appear at your kid's birthday party, and has been known to exclaim "I didn't do it!"

He may put off a "good for the community" vibe. But one thing is for certain. I do NOT trust him and I do NOT want to play against him or his team. I just hope someone pheromones it over to him to let him know. 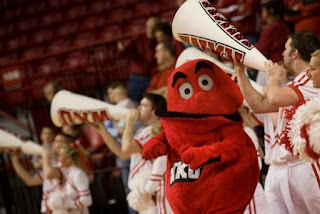 Big Red's resume is impressive. He's placed in several mascot tournaments. He's been voted to All-Mascot teams. Look at him.  You can't help but wonder how. He's a red Grimace with a whale mouth.

He has two signature moves: the belly slide and the belly shake. I was unable to find footage of either and I highly urge you not to Google the phrase "Big Red belly shake" at work. I'm assuming the belly slide is just him sliding on the floor on his belly. I think it's also safe to assume that the belly shake is comparable to the Truffle Shuffle.

So if he looks how he does and those are his go to moves, how is he so popular at these contests?

Maybe it's because he's good with kids.
Maybe it's because he simply can't blend into the crowd.
Or maybe at the end of the day, the Hilltoppers can rest assured that Big Red will not be duplicated. There are seemingly countless teams named the "Lions" or the "Tigers" or the "Bears" in the sports world. Having an amorphous red blob as your mascot gives you something unique, something to be proud of, thus making him what you want in a mascot: something that rallies fans together.

Or maybe he just slept his way to the top.