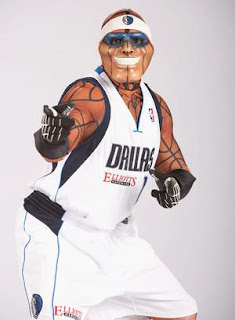 Growing up a Dallas Mavericks fan, I've been with them through thick and thin. I've seen the ups. I've seen the downs. And there's been a lot of both. Someone else has also been right along the Mavs side through all of this: Mavs Man. 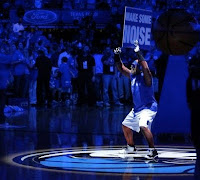 Mavs Man's background is a little unclear. There's not a lot available about his origin except that he showed up about 7 years ago to inspire Mavs fans with his high flying dunks, his acrobatic performances, and his apparently incurable skin condition.

Poor Mavs Man. I mean literally "poor" Mavs Man. For all of the good Mark Cuban does for the Mavericks, I don't think he pays Mavs Man enough money. And this needs to be heard. By the people. For the children.

1) He can't afford a dermatologist. The guy obviously has some skin issues. It's like he Willy Wonka'd a basketball-meal test gum that he ate even though he wasn't supposed to, so he grew a little and his skin changed colors and textures. (Editor's note - Although the science completely checks out, this isn't what happened. Everyone knows only 5 golden tickets were awarded and our man didn't get one.) They say beauty is on the inside, but we can all agree that Mavs Man isn't a MMILF.

2) In order to pay rent, Mavs Man has to resort to selling his undesirable body:


3) Mavs Man can't pay anyone to improve his Geocities website. Someone get him Dreamweaver. Or even Mario Paint.

4)  He seems pretty open to a new type of currency to get what he needs: violence.

All of this could be moot if another of my theories is right - that a Mavs player doubles as Mavs Man. His build, leaping ability, and head shape are eerily similar to several current Mavs players. Or Khloe could be pulling a fast one...

But if my theory is correct, then Mavs Man needs some extra cash. Maybe his buddy Champ will lend him some green. Who's Champ? Champ is a horse -  a maverick's horse, if you will. He's the other Mavs mascot. He'll eventually get his own Furry Fandom entry. Don't worry.

If Champ can't come through, Mavs Man may need to get some more side jobs. So if you cross his path someday, just be sure to show your appreciation for his abilities on the court. I'm sure he'd look up, give you a genuine smile, a nice thank you, and get back to stocking the Ramen at Walmart.