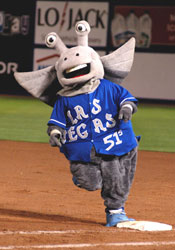 Baseball is considered America's pastime. America. Land of the free. Home of the brave.

I ask you: What is the biggest threat to America's freedom and braverydomness?
Terrorists?
Depletion of resources?
High glucose corn syrup?
Khloe and Lam Lam?

No. None of the above. The biggest threat to America is aliens.

The Las Vegas Area 51's have found the perfect intimidation tool: Cosmo. From his website:


Cosmo, a fan favorite of all ages, returns to Earth for his ninth season as the Mascot for the Las Vegas 51s (2001- present). Cosmo is a survivor of a spaceship crash who spent time at "Area 51" and was a baseball phenom on his home planet of Koufaxia.

There are so many questions. Does this mean he only comes down to Earth for a minor league baseball season every year? How did he fix his spaceship? Does he require Will Smith and Tommy Lee Jones impersonators to be his bat boys? Why is he so selfish with his technology? Does he constantly need sugar water? How come my only knowledge of aliens comes from Men in Black?


Cosmo's favorite movies include Men in Black 1, 2, AND 3. Men in Black 3 hasn't even come out yet. Either this is a Tyler Perry situation where this alien blindly loves all alien movies, or he can see into the future.

The alien obviously loves Will Smith. Is this a Stockholm Syndrome thing? Has he SEEN Independence Day?

So the guy can fix a spaceship, see into the future, and get away with not wearing pants in public. BRB buying him a beer.

I always thought that when extraterrestrial life reached out to us humans, we'd be able to put them into contact with our top level diplomats and scientists, the true ambassadors of this world. Instead, we have Cosmo running around bases and making middle school appearances.

I had higher hopes for our real life ET. Instead of phoning home, he's probably sexting girls he met at the dot race.