When it comes to mascots, the Buffalo Bisons have an embarrassment of riches. They have three official furry fan favorites. THREE.

The first is Buster T. Bison, the team's namesake. He is a big bison. 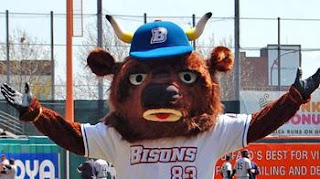 The second is his cousin, Chip. He's another big bison, albeit a sadder one. Makes sense. 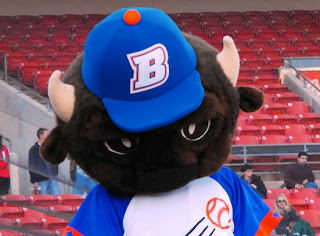 The third mascot turns my brain inside out and whispers sweet nothings of dementia into my ears.

Belle "The Ballpark Diva"
Buffalo Bisons
(I thought the plural of "Bison" was "Beeson"?) 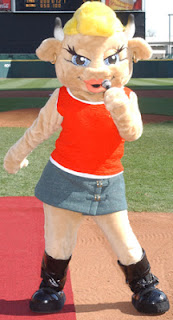 
Belle, "The Ballpark Diva" is the singing-sensation from Hollywood that has returned to Dunn Tire Park to perform all her smash hits for the fans of the Buffalo Bisons. Known for her fashion sense and sweet dance moves, Belle is 100% girl.


Let's break this down.

In August of 2007, only a year into knowing each other, Belle and Buster got married. HOLY COW (lol!)! This seems like a really quick dating decision, but I guess when you know, you know.


Don't worry about poor lonely sad Chip. Not only was he the best man at the wedding, but he also had the privilege of walking Belle down the aisle.


With Chip as the best man, who knows what kinds of debauchery they got into at the bachelor party: Patty "Cake"? Cow tipping? Kobe Beef Cow Strippers? Milking?

To many Buffalo fans, I'm sure Belle is 'the one that got away'. But now she's officially part of the family - a weird family that might produce minotaur offspring, the perfect killing machine super soldiers. And that should help Bisons fans sleep at night.

If you feel like you really know her by now, try the Belle Crossword puzzle. I didn't create it. But I did just ace it.