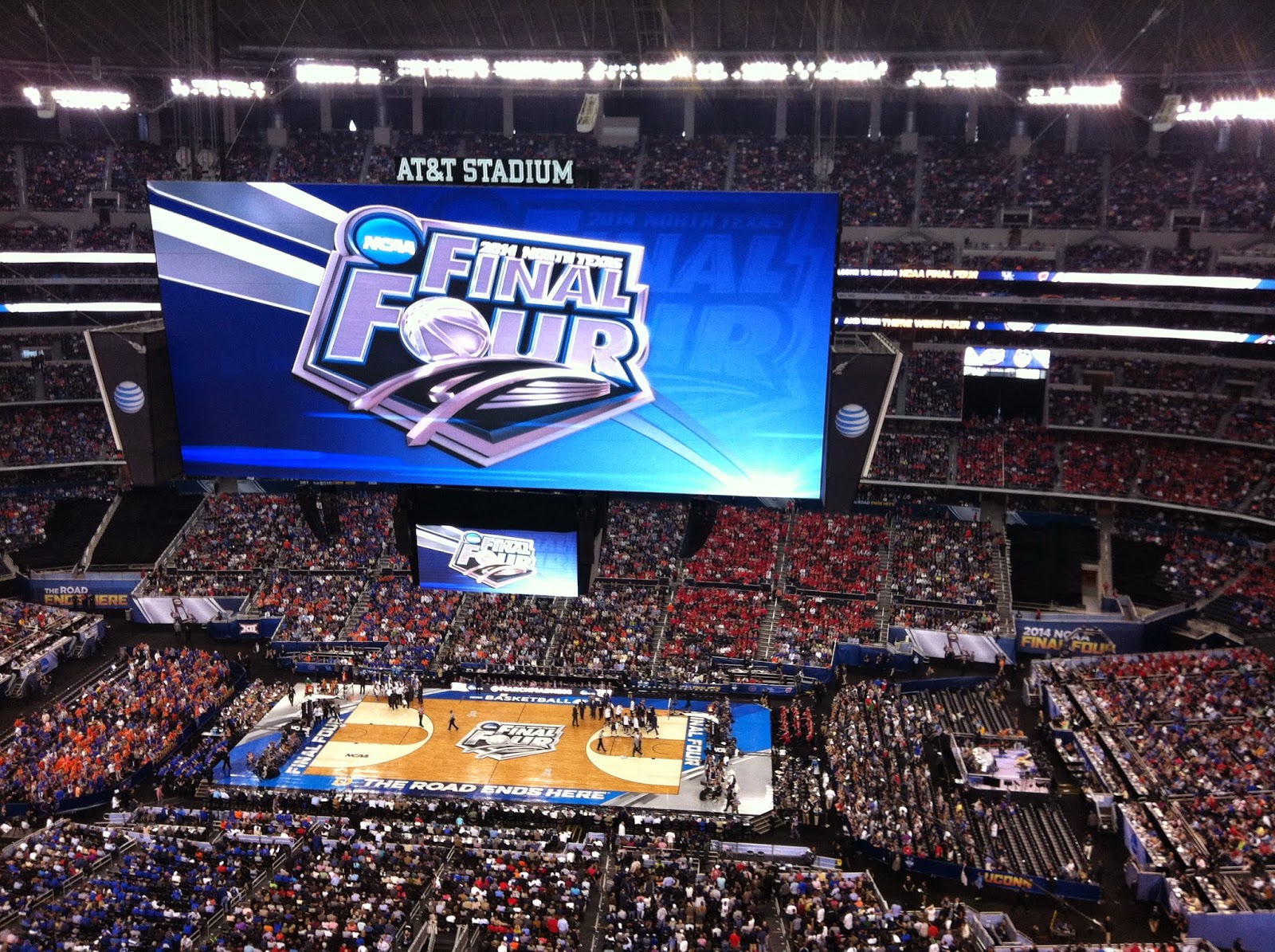 Knowing I would be in Dallas the week before the Final Four, my buddy asked me if I’d like to have his extra ticket to the Saturday games. After I facedown Tigger bounced around my apartment for 5 minutes, I told him, ‘YES’. 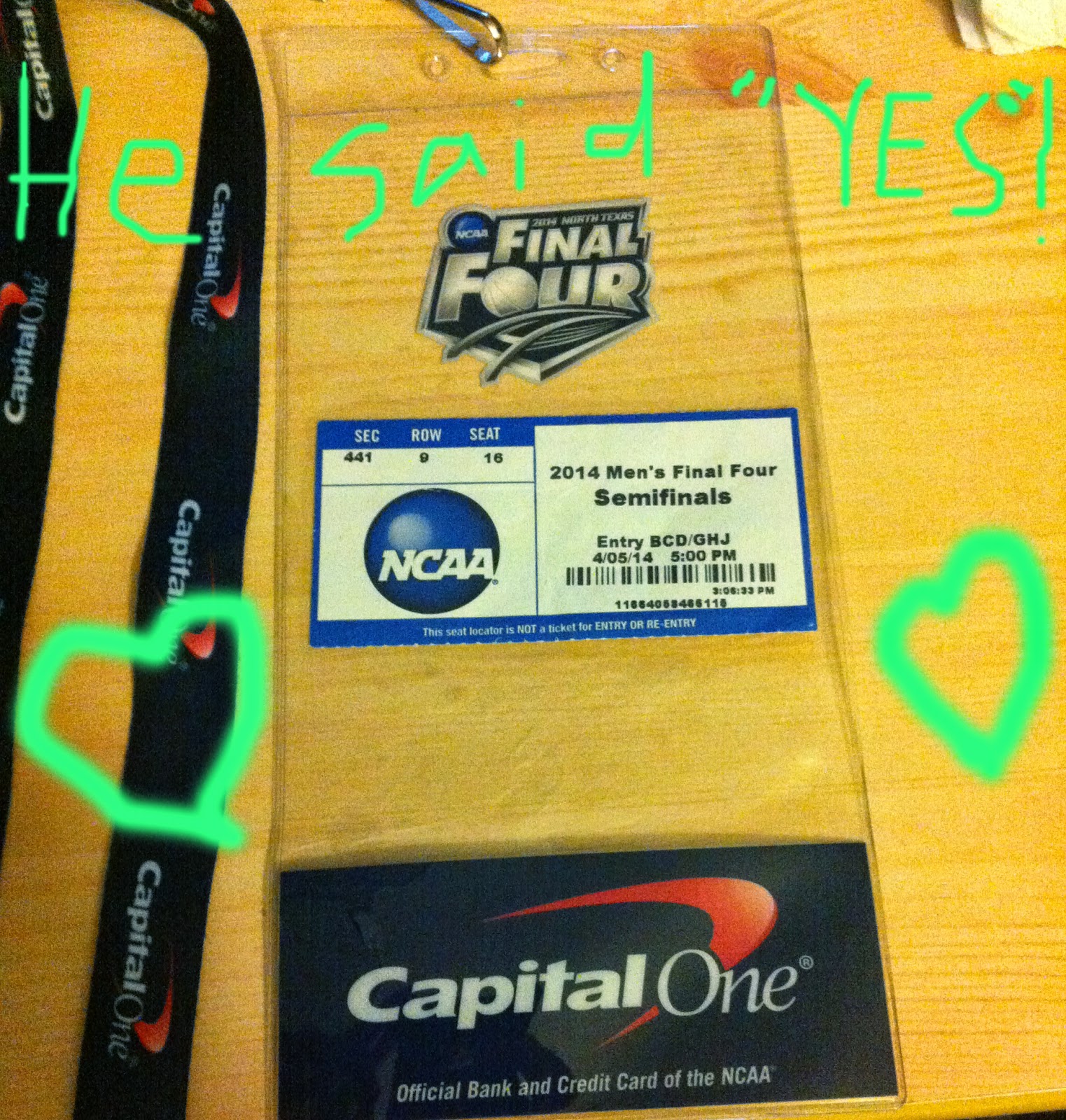 We took a car/train/bus combo ride to Arlington (or as Charles Barkley calls it "North Dallas"), making a stop at the sponsored pre-game tailgate. We were able to continue the drinking that we started on the train…for $9 a beer. To make matters more inconvenient, it started pouring rain. We quickly emptied our savings accounts for multiple rounds of beers and found shelter under a tent. As we huddled together under cover, sipping beer and avoiding rain, I couldn’t help but to feel bad for my hometown. Dallas has the worst luck hosting people. The ice storm Super Bowl a few years ago. The whole JFK thing. NOW THIS RAIN???

After several rounds of our Mîllér Lîté, we headed towards the stadium. We stopped only to finish our beer and drunkenly make fun of the fans we saw —
Oh! Ha! Look at this guy in his school hat and school shirt. Who does he think he is?

Our obnoxious buzz didn’t take long to wear off as we realized that there would be no beer served in the stadium. I was actually upset that I couldn’t pay Jerry Jones $16 for a NyQuil cup of Miller Lite. Such is life.

In my humble (?) opinion, the "Best Atmosphere in Sports" title belongs to college basketball arenas – Cameron Indoor, Phog Allen, Rupp Arena – places with limited seating, but no limit to their crazy spirit. And there’s nothing like tapping into the intimacy of college basketball like hosting the biggest games of the year in an 80,000 person idiocracy-laced stadium.

For those who don’t know, the video board in AT&T Stadium is quite large. It's 25,000 square feet of display, which is approximately 102,213,201,200,129 times the size of my New York apartment. Throughout the game, celebrities were shown on the big screen, stirring reactions from the crowd. Local favorites like Troy Aikman and Tony Dorsett got the biggest applause. National icons like LL Cool J and Drake drew their own roars from the crowd. As they focused in on him, Drizzy Drizzy Aubrey held his fingers up to form a K, showcasing his year-long devotion to an obvious one-and-done team. His retroactive sports loyalty started from the top and is still at the top. 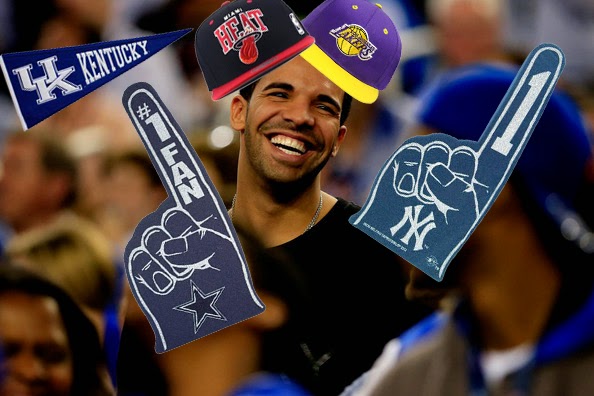 The most uncomfortable crowd reaction had to be Jerry Jones getting booed. That can’t feel good. The stadium is his baby, his legacy, his livelihood. That would be like inviting someone over for dinner, charging them $40 to park in your driveway, watering down the wine, asking them to give you a quarter for the after-dinner toothpick, then having your guests tell you they didn’t have a good time. Poor Jerry.

Filling in the time between the celeb spotlights on the jumbotron, there were some games going on down on the court. And I was going to watch them. Even a Drake spotting couldn’t ruin that.

My relationship with college sports has gotten weirder as I’ve gotten older. Rooting for guys younger than me (and in some cases, kids) just seems odd. I still love college sports, but when I find myself getting frustrated or even mad at a group of 18 year olds, I have to take a step back. My theory is that my age has put a distance between college sports and my ability to get too worked up over them. Maybe my held-over adolescent dreams of Bo Jacksoning the NBA, NFL, NHL, MLB, EPL, US Open, AND the Masters is finally being crushed. Hoping to be the first seven-sport pro athlete is just a bit too lofty a goal at my age. It’s time to get real. I need to concentrate my talent on one sport and cash out.

Despite my decreased obsession with college basketball, I do still love it. And I loved the games this Saturday. UConn shocked the country when they pretty handily took down a previously dominant Florida team. And Kentucky continued their perpetuation of what’s wrong in college sports by beating a fundamentally sound Wisconsin team.

After the games, we mass exodused out of the stadium to catch a bus to catch a train to catch a connecting train to catch our car. During our 3-hour ride home, I began wondering to myself – How does Jerry Jones get home? Does he take a helicopter? Does he have a secret tunnel all the way back to his house? Does he wait out traffic as he dines on poached brontosaurus eggs, sitting atop the stadium roof overlooking his kingdom of overhyped underachievement? As a Cowboys fan, I’m curious. I’ll always remember this past Saturday. I had a great time. It was everything I expected and more. Now I have a story to tell forever. To my friends. To my future kids. To my dogs when no one else is around. And especially to myself as I disappointingly look in the mirror come beach season. I’ll be able to tell them all the tale of how I witnessed Calipari – known for his sleaze – continue his Final Four success at Jerry World – known for its excess.