This one has been a long time coming. This dates back to before little baby Chris posted his first Furry Fandom post. This particular mascot was actually part of the reason I started the Furry Fandom series altogether. You may not know what school it represents, but I'm sure you've heard of it. Either way, I'm here to to enlighten you. 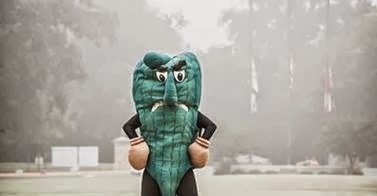 Delta State has two mascots, one official and one unofficial.

Their official mascot is The Statesman. He's just a dude in a funny hat with an unearned Masters green jacket. According to Wikipedia my reliable go-to source for everything Delta State, his conception was inspired by the role that a state representative played in placing the school in Cleveland. Apparently that gets you cemented into sports history for years to come.


Realizing that an old white political figure is probably not the best type of person to get behind, the Delta State student body set out to develop another mascot. They created The Fighting Okra.

To you, The Fighting Okra might seem lame. To me, he's horrifying. Think about it. This okra is in an unnatural state. As far as I know, the only way okra is created in the wild is being fried already. When have you ever seen okra otherwise?

Maybe the school didn't think that would be frightening enough. So they picked a bad one. Like he is a bad dude. He's not a mascot I would ever want to butt heads with. Just look at him. He has a perpetual sneer plastered on his terrifying face. And boy, does he live up to the hype.


Maybe the student body knew what they were doing. On the surface, a raw piece of okra isn't intimidating at all. But underestimating this mean-spirited vegetable and his teams behind him might just get you beaten, in sports and physically in real life.

So you see what has to be done. Right now. Join me in my pledge to fry any and every okra that you come across. You'll be turning a bad vegetable into a good one.