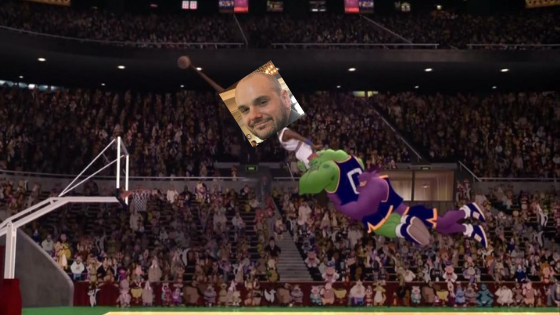 The setting, a rec gym at 6 a.m. The game, basketball. The stakes, laughably low.

An ankle-breaking crossover is not how it happened. No, I broke my ankle because I fell on it funny. So funny lol! Much less embarrassing.

I felt a pop. I fell to the ground. I immediately took off my shoe and sock because I knew doing it later would yield blinding pain. So smart. Almost as smart as jumping to pass – please don't tell my high school coach or my father – and twisting in a way that makes you fall funny — so so funny lolol! — and feel a pop.

It's a non-displaced fracture, meaning it's more of a crack than a separation. Thankfully. Four weeks on crutches lead to four weeks in a walking boot lead to four weeks with an ankle brace. That's about three months to eulogize my basketball career.


We gather here today to mourn the loss of one mediocre, middling basketball career. It lasted, some rec-league refs say, too long. Ashes to ashes, dust to dust, stop playing basketball you must.

- a fitting, beautiful eulogy that only took 3 months to write

When I was in high school,  I gobbled up every college basketball game I could. I watched bottom-tier NBA games, sometimes just to catch a few minutes of NBA on TNT for the #fun #content. Then in college, I went to every home game, even rushing the court when Acie Law hit that 3 at the buzzer to beat Texas and put A&M on the map as a legitimate basketball program.

The only concrete items on my bucket list are to attend games at a handful of legendary college arenas.

I watched just about every Mavericks basketball game for 15 years. Bad, bad basketball early on. Then fun, bad basketball with the Three Js. And then hope with Dirk, Nash and Fin. Heartbreak in '06. Sweet redemption in 2011. I watched that championship from a bar in NYC, and I cried seeing Dirk finally hold the trophy. I was overwhelmed.

That feeling only comes when you're rooted so deeply in fandom for something.

All the while, I was playing basketball on city teams, briefly in high school, intramural teams, rec leagues and weekly pickup games.

I've played basketball for almost thirty years now. And while I've never been objectively great, the game has always been there. An escape. A way to exercise without having to think about the fact that I'm exercising (remember this?). A sport that has been my favorite sport for nearly three decades. To watch, to play and to discuss.

So maybe the stakes weren't quite so laughably low. Sure, it was a pickup game. But I got more out of it than you'd think.

As the people I want to be friends with at The Ringer say, "Basketball is very good."

Maybe I'll play again. People come back from worse. That fact is, though, I'm almost 32. I have a family to think about. And my bones might prefer something with lower impact like swimming or playing Spider-Man on PS4.

For the time being, I'm lucky to be surrounded by kindness. My friends pitched in to buy me a new video game. My wife even mowed the lawn. She didn't edge, but hey I'm not picking nits unless she's reading this in which case please edge next time thank you we have appearances to keep.

Worse things happen to worse people. This isn't a pity party. It is cathartic, though.

While I won't be available to play in your church 3on3 tournament anytime soon, I'd love to talk about the latest petty tweets from NBA players any time.