Shut up and take my money. 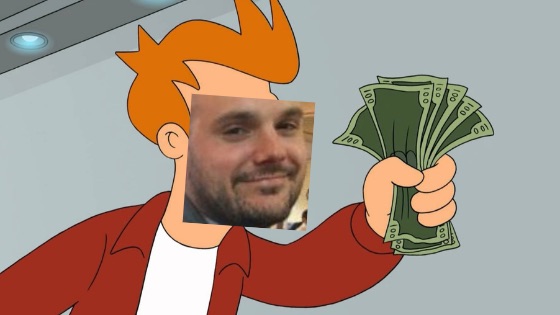 I’ll remove some of the suspense up front (classic Chris storytelling) by letting you know that this event happened a few years ago. I jotted notes down and the dialogue exchange almost immediately so I could file the police report, however I never formulated what you see here until now. Originally, I wasn’t going to share it, but as we all know,  I must deliver #content to the #masses to become an #influencer. So here’s the post, Mr. or Mrs. Brand Manager With an Overwhelming Budget.

This is a karmic layup. A Samaritan sure thing. Meharry is a medical college down the street from my house. The person asking is a guy walking down the alley behind my house, not an uncommon occurrence in my neighborhood.

"Hit this street, take a left and walk about a quarter mile. You'll see it." I reply matching his friendliness.

I'm in my detached garage that faces the alley. I just finished mowing my lawn, now getting my weed-eater ready to go. After a few clarifications, the guy was on his way. My good deed for the day complete.

Five seconds later he's back, this time inside my garage and outside any line of sight from our neighbors. The veil of friendliness has fallen, now presenting a threat.

The thought is almost laughable at first. I'm in athletic clothes, covered in sweat and dirt. I try backing away.

His hand has been in his pocket ever since he came into the garage. He starts to pull something out of his pocket. Before he can, I take my phone out.

"Where's your money?"
"It's in my house. I'm going to leave my phone here with you while I go get it."
"Who else is in there?"
"Just my wife."
"Leave the door open. Don't try anything or I'll shoot both of you motherf--[yeah, I edited this so what it’s a family show].”

I start walking from my detached garage to my house. The back door to my house is thick metal. I know that if I can get the door between us, I may be able to muscle him back, shielding myself from any violence in the process.

Luckily I left the back door unlocked. I open it, slam it on him. He pushes back. I get the door shut and locked. I yell to my wife to go upstairs and call 9-1-1.

Even with a swift response time from the police, the guy is long gone. My phone, gone with him. The police, and the detective who calls the next day, are as helpful as they can be. The phone was probably destroyed and ditched immediately.


That's the end of the story. There's no resolution because I haven't gotten one. At least not in the standard narrative sense. As far as I know, the guy is still out there. He probably lives a few streets over.

Instead, the resolution I found is internal. I'm at peace with it. It also didn’t hurt that one of my neighbors (who we think is an ex-Marine) apologized for not being there to help and told me to come get him if I ever see that guy again — it was chilling. My three dachshunds, on the other hand, have provided no additional security.

Who knows why this guy robbed me? Maybe he needed money to eat. Maybe he has kids who needed to eat. Maybe he just walked by my garage and saw an opportunity. There are a thousand scenarios and I've run through most of them.

At this point, I’m just grateful nothing worse happened, and that it wasn’t my wife in the garage instead.

I haven’t seen the guy around the neighborhood since. It's been about two years. Funny thing though, my recollection of what he looked like faded quickly, almost instantaneously.


FAQ section
Q: Did you have FindMyiPhone on?
A: No, for I am a dummy.

Q: When he asked who else was in the house, did you answer using the Borat voice?
A: No, for I am a dummy.

Q: Do you feel more equipped to handle this scenario after playing Spider-Man on PS4?
A: Yes, for I am a dummy.